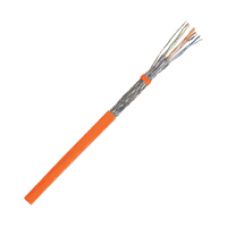 Supports migration to 25G over 30Mtrs and is fully compatible with 10GBaseT over extended distances >100Mtrs. Features double the bandwidth and half the crosstalk of Cat6A and 360° screening with individual pair foils and an overall braid offering superior performance in terms of alien crosstalk immunity.

Guaranteed to exceed all channel requirements in all configuration scenarios (up to 4-connector channels)when installed together with the GG45 LANmark7 420.735 connector.

Specification
LANmark-7 cable is a 4pr STP with individual pair foils and an overall
braid offering superior performance to 1000MHz. It is fully compliant with
the Category 7 standards and when installed together with the GG45
LANmark-7 connector as a system is guaranteed to exceed even the
toughest channel requirements.

Application
LANmark-7 is the highest performing standardised solution in the market
and will support all current and planned data applications.
· All Ethernet applications including
· 1000Base-T
· 1000Base-TX
· 10GBase-T
· CaTV up to 862MHz
· Any future Class F application
· Cable sharing applications

Installation
Installation is one of the unique features of LANmark-7 cable. Extra
attention has been paid to ensure screen coverage is maintained both
during and after installation. The cable is been designed specifically to
offer both optimum performance and ease of termination when used in
conjunction with the LANmark-7 GG45 connector.

Supplied per metre, order as much as you need!